New Rice Husk Cups! But what are they? 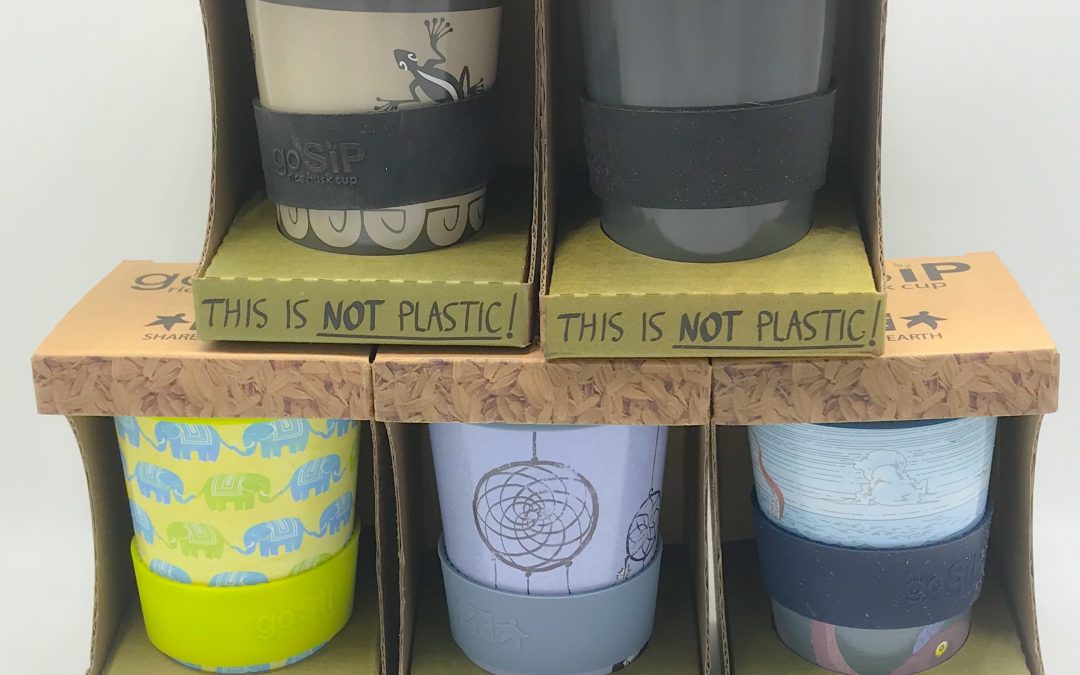 Made from natural rice husk, these new rice husk cups provide the perfect way to enjoy your hot drinks on the go! They look great too, with some fantastic designs that include elephants, geckos and sea themes!

Recently, I have been looking at ways that I can reduce the amount of plastic or single use items that we use as a family. I often use a travel mug for hot drinks during the day, as I tend to get distracted when working and my drinks always go cold! I don’t like the taste of the stainless steel mugs so I started using a melamine one. However, it hasn’t lasted very long and I needed an alternative. I had heard of rice husk mugs so thought I’d give them a try. They are amazing! My drink stays warmer for longer and it doesn’t stain either. In fact, it was so good that I decided to add some to the new environmentally friendly product range because the cups themselves are also plastic free.

But what is rice husk?

Rice husk is a waste product that is produced through farming rice. During the milling of a rice paddy, approximately 78% of the weight is received in rice and the remaining 22% as husk. This husk is used as fuel in the rice mills to generate steam for the parboiling process. It is during this process that approximately 25% of that husk is converted to rice husk ash.

In India alone, approximately 20 million tonnes of rice husk ash is produced annually. When this is dumped in large quantities it causes damage to the land and surrounding area. It is important to find new sustainable uses for this agricultural waste. Rice husk ash is a strong material, built of naturally occurring silica that can help strengthen building structures. It can be used in things like blocks, brickwork and other building materials. Rice husk ash also resists moisture penetration and is a great insulator, which are just two of the reasons that it makes such great travel mugs!

One of the great things about rice husk is that it is still completely biodegradable! It is extremely resilient so can be used again and again. When you are ready to dispose of it though, you can soak it in water overnight then bury it in soil or compost. The cup will break down and start to be absorbed into the soil in about 6 months.

Rice husk travel mugs do not contain any melamine or other plastics. They are also BPA and toxin free, so have nothing nasty to leach into your drink.

The cups are dishwasher and microwave safe. They come with a silicone lid and band which are non-toxic and completely recyclable. The lid has a hole to drink through and a pull over flap to cover the hole when you aren’t using it. I have done the essential “shake it and turn it upside down over the sink” test. The lid stayed firmly on! A few drops came out of the small hole in the lid that’s there to let steam out, but the drink itself didn’t spill.

So if you are looking for a multiple use, eco friendly cup look no further. They are great for hot drinks when on the move or to keep drinks warmer for longer when working. Check out our new range of rice husk cups here. I’m sure you’ll love them as much as I do!

This website uses cookies to improve your experience while you navigate through the website. Out of these, the cookies that are categorized as necessary are stored on your browser as they are essential for the working of basic functionalities of the website. We also use third-party cookies that help us analyze and understand how you use this website. These cookies will be stored in your browser only with your consent. You also have the option to opt-out of these cookies. But opting out of some of these cookies may affect your browsing experience.
Necessary Always Enabled

Any cookies that may not be particularly necessary for the website to function and is used specifically to collect user personal data via analytics, ads, other embedded contents are termed as non-necessary cookies. It is mandatory to procure user consent prior to running these cookies on your website.

Thank you for visiting our website! Due to the Covid-19 restrictions and changes to working patterns, unfortunately items might take a little longer than normal to dispatch. They will still reach you as quickly as possible, but if you need your order by a specific date then please send us a message when ordering. Dismiss